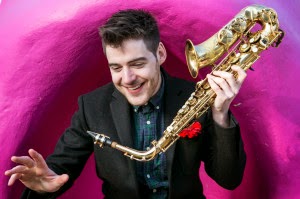 Well done to Phil Meadows who has won the "newcomer of the year" in the 2014 Parliamentary Jazz Awards. Phil is a sax player from Manchester, who was educated at Leeds College of Music. His debut album is called Engines of Creation. Other Northern Winners include Jazz Instrumentalist of the Year-Arun Ghosh and Jazz Ensemble of the Year - Beats & Pieces Big Band

Christine Tobin won jazz vocalist of the year in the 2014 Parliamentary Jazz Awards. The Irish-born singer and composer, whose fine interpretation of songs ranges across jazz, blues and folk, was born in Dublin but is now based in the UK. In 2012 she won a British Composer Award for Sailing to Byzantium, her settings of poems by WB Yeats and last year she recorded imaginative versions of Leonard Cohen classics. Tobin has recorded frequently with many leading jazz musicians, including Kenny Wheeler and Mike Gibbs. Her vibrant interpretations of Bessie Smith were featured in film director Mike Figgis's Red White and Blues documentaries in the Martin Scorsese Presents The Blues series.

The winners were announced last night for the parliamentary awards, which are now in their 10th year, and which are organised by the All Party Parliamentary Jazz Appreciation Group (APPJAG). The awards are sponsored by music licensing company PPL.