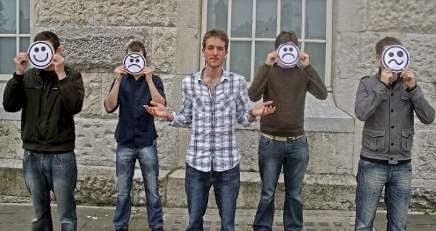 Enforced by life threatening and debilitating illness, JJ had to adjourn his studies at the Royal Academy in 2012, but tough as old boots and single-minded as ever, JJ returned to JJ returned to RAM and is back in London 'jazzing' with a vengeance to great acclaim. So it was with exquisite pleasure and relief that I re-arranged JJ's planned 2012 gig at Bradford JATPjazz. Again catching the eyes and ears of London's Jazz cognoscenti do come along to see what all the fuss is about and catch some stunning updating of bebop and hard bop with delightful injections of Radiohead and even Genesis.

HSQ perform classic and contemporary jazz composed and arranged especially for their line up permitting unusual combinations of saxes and other woodwind. Strong and experienced sax players, distinctive voices and style, blending different tonal qualities to create a special sound with bass, bari and 2 tenors. HSQ+2 yields the natural addition of percussion and harp enabling yet greater wondrous music. They can swing hard and remain true to their rich European musical traditions with subtlety and depth. Presented by Jazz North and JATPjazz

As part of Bradford's Threadfest 2014, Riddlesden's Matthew Bourne is revealing a glimpse of a new synth project he is about to record. This is a free gig !!
(http://bradfordthreadfest.com)