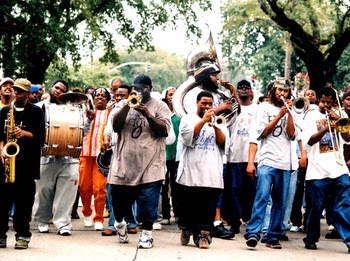 The Hot 8 Brass Band is the world-renowned New Orleans based brass troupe that blends marching music with hip-hop, jazz and funk, offering a thrilling update of the traditional brass band sound with stunning results.  Founded in 1995 by Bennie “Big Peter” Pete, the original members were drawn from the Looney Tunes Brass Band and the High Steppers Brass Band. Any incarnation of Hot 8 Brass Band will boast eight or nine players of the highest rate, bringing the passion and noise through a bevy of trombones, saxophones, trumpets, snare and bass drums, all buoyed up by the immense tuba baselines of band leader Bennie Pete. These musicians over the years have been inspired by artists such as Tuba Fats, Leroy Jones, Louis Armstrong, JJ Johnson, Stevie Wonder and Jackie McLean, and have variously recorded and performed with some of those mentioned and more.

Famous for their blistering, high energy performances - expect them to tear the roof off of the venue during their six northern concerts in May.

“Get your dancing shoes ready” The Independent