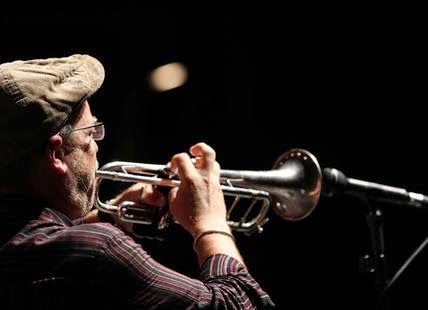 Jazz duos are difficult things to do well. They only really work if you have artists who not only have a good understanding of the music and each other, but who are able to play beyond their instrument to provide a full soundscape and range to the listener. In Dave Douglas and Uri Caine you have two individuals at their most creative parts of their careers, and with a wide knowledge of jazz, folk music, church music, classical music and music from the Jewish tradition. They are phenomenal technical players. More than this though they like and respect each other. Their music will be captivating.

Dave Douglas has been described as “the unassuming king of independent jazz” (Downbeat) has arguably become the most original trumpeter/composer of his generation. He explicitly cites such diverse influences as Igor Stravinsky, Stevie Wonder, and John Coltrane.

He has released many recordings under his own name. One of his most recent is the heart rending, achingly beautiful Be Still, in memory of his mother who had died of cancer. The album was the combination of hymns and folks songs that she asked him to perform at her funeral with his quintet including vocalist and guitarist Aoife O'Donovan of the contemporary bluegrass group "Crooked Still"

Well done to the Assembly Rooms in Leeds also for booking this duo - the only UK tour date on the current 12 date European Tour.

Dave Douglas and Uri Caine perform at the Howard Assembly Room on Friday, 2 May. For more information and to purchase tickets -