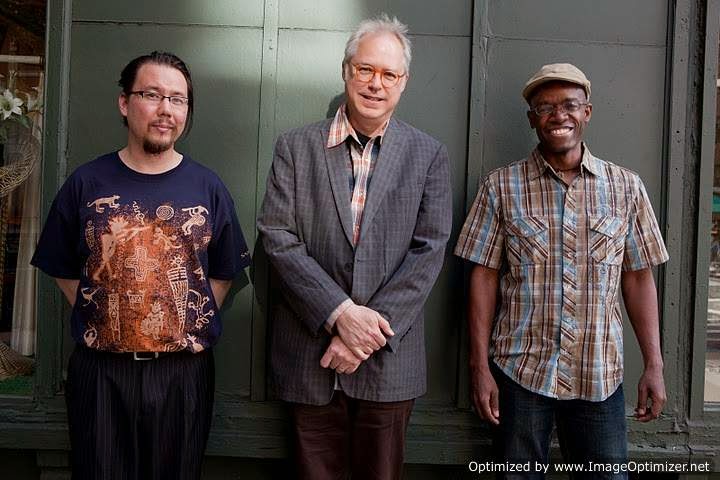 It has been over 20 years (too long) since his last appearance in June 1990 - in a concert promoted by the former Leeds Jazz at the Irish Centre. The band then contained Joey Barron, Kermit Driscoll and Hank Roberts. Here Bill returned to the beautiful acoustic of the Howard Assembly Rooms on 5th April with a trio comprising viola player Eyvind Kang and Rudy Royston on drums, playing music that included pieces from his new “Beautiful Dreamers” album.

Bill Frisell’s playing traverses the broad terrain of American music, ranging from jazz, country to blues and more. Over the years he has contributed to a large body of work with such diverse collaborators as diverse as Marianne Faithfull, John Scofield, Jan Garbarek, Lyle Mays, Vernon Reid, Julius Hemphill, the Frankfurt Ballet and film director Gus Van Sant amongst many.  He is one of the most sought-after guitar voices in contemporary music. The breadth of such performing and recording situations is a testament not only to his singular guitar conception, but his musical versatility as well. In recent years, it is his role as composer and band leader which has shone out.

It was a beautiful night of music. Eyvind Kang's viola was haunting and bluesy by turn, sometimes sounding like a Japanese koto, sometimes playing some lovely jazz basslines under the guitar. Rudy Royston was a revelation on drums, both quirky, technically superb and funny. Bill Frisell was just the master of the guitar, coming on with his red tartan jacket, and smiling wickedly at his own playing and that of others, playing from the heart.

It was a set full of surprises - who'd have predicted the jazz standard "Days of Wine and Roses", the improvising over the sequence of "What is this thing called love" and the rock n roll guitar licks. Blind Willie Johnson's "Nobody' Fault" was heartrending. There was also the the encore - two of George Gershwin's loveliest tunes "Loves you Porgy" and "There's a boat dat's leaving soon for New York", all played in that  intimate and quiet way full of joy and discovery.

The musicians obviously showed delight in each other and in the reception from the packed auditorium. "Nice to be in a country where they speak English" he said "not that I could understand the person at your airport"! Welcome back to Yorkshire, Bill, and don't leave it too long before you come back again.