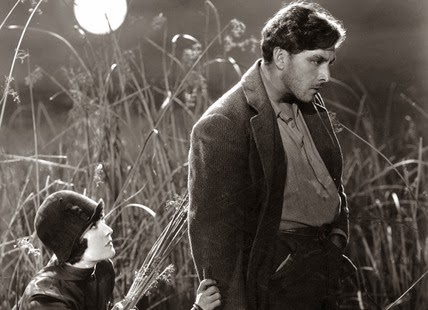 Sunrise, F.W. Murnau’s 1927 masterpiece of silent film was made in the twilight of the silent era and became a swan-song for the vanishing medium. It was a story about innocence and experience, urban and rural America, about love and violence – and with a happy ending.

Pianist Joanna MacGregor and jazz saxophonist Andy Sheppard have a long musical partnership, both wide ranging and innovative musicians from the classical and jazz traditions. Together they  created a new live music score especially for the Howard Assembly Rooms performance in Leeds.

At the start Andy Sheppard explained a little bit about the genesis of the music and how it sought to explore the effect that music has on film and vice-versa.

The music was wide ranging – much inspired by Joanna McGregor and her visits to the American Deep South, with deeply personal connotations to Joanna's childhood and a father who was a lay preacher in an Evangelical church. So there were gospel numbers like “Up above my head”, and “Sometimes I Feel Like a Motherless Child”, Tom Waits “Picture in a Frame”, a version of Deep River that remixed bits of the original 1927 recording with darker treatment with layers of drums, disturbing incoherent vocal samples and dissonant layers of electronics.

The musicianship was a tour de force – live accompaniment to a silent film lasting over an hour and a half was an achievement in itself.  It was in great tradition of silent film music – it enhanced the film not taking over or swamping the action on the screen.

The concert, supported by the Opera North Future Fund, proved to be a very satisfying evening enjoyed by a full house in Leeds at the Assembly Rooms.