An uphill struggle in Hebden! 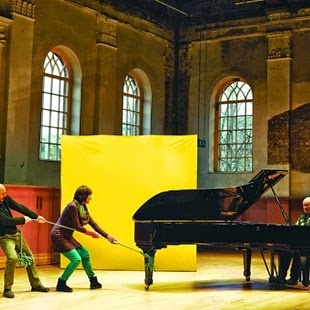 Hebden Bridge Piano Festival runs from Friday 11-Sunday 13 April and is directed by jazz pianist an one time promoter of jazz club HX7 venue Dave Nelson. In it's second year, the festival is a growing part of the cultural landscape. Although the focus is still classical there is more jazz and blues piano this year with appearances by jazz pianist Gwilym Simcock and blues piano player Dale Storr


Dale Storr is appearing on Sat 12 April 6.30 at the Town Hall admission free

Hebden Bridge Piano festival are also involved in a piano event of a different type for the Yorkshire Le Grand Depart cultural festival. On 5 April a team of cyclists and pianists will take part in "The Grand Departs", an epic musical and physical feat of strength and endurance that will answer the question - How many cyclists does it take to pull a grand piano up a hill?

Starting at Mytholmroyd, a team of Calderdale’s most resilient cyclists will pull a grand piano up Cragg Vale Road to the top of Blackstone Edge, the longest continuous ascent in the Grand Départ route. Local and international pianists will play a non-stop specially composed piano performance throughout the climb.

David Nelson says  “What better way to welcome ‘Le Tour’ to Yorkshire than with an audacious musical pedaling crazy adventure? This has never been done before – probably for a very good reason – but we’re up for the challenge.”

A bespoke vehicle called a PianoPorté is being designed and built for The Grand Departs by local sculptor Andy Plant. It will be powered by cycles, using a 2CV gearbox, and will be around 20 feet long.

Local residents will be asked to lend their moral support by cheering on the spectacle and invited to join in the send-off at 12 noon in Mytholmroyd.