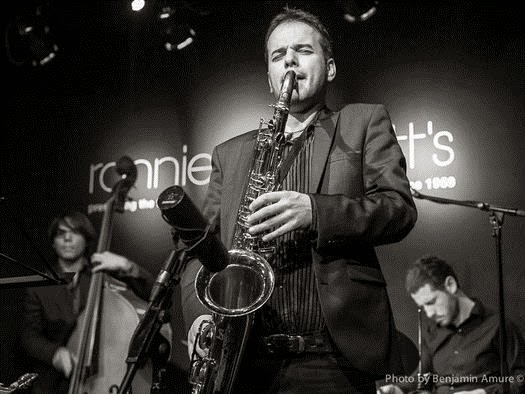 April 25th -Vasilis X Quintet – The Wind Machine (pictured)
The Wind Machine, first unveiled at the Ealing Jazz Festival in July 2013, is an attempt to capture the spirit of the great big bands with just a quintet, and is inspired by Stanley Turrentine's 1963 album 'A Chip Off the Old Block', which recast classic Count Basie arrangements for a small ensemble.


June 6th - Paul Edis Sextet
Led by a ‘brilliant young pianist’ (Alyn Shipton, The Guardian) the Paul Edis Sextet is steeped in the straight-ahead tradition, but with an original and contemporary edge. With some intricate arrangements, solid grooves and exquisite melodies, this group has wowed audiences and critics alike with their performances to date.


July 4th - Customs House Bigband
This dynamic group of local musicians are a major ensemble on the Northern Music Scene. The group offers an eclectic mix of big band styles ranging from the traditional Count Basie swing era through to the modern forceful styles of Buddy Rich and Gordon Goodwin. For this special concert the band will perform a selection of compositions and arrangements by Paul Edis.


August 1st - Northern Monkey Brass Band
Formed at the beginning of 2009, the band formerly known as Horn Dogs are a deeply funky collective of some of the finest drum and brass players in the North East of England. Inspired by Rebirth Brass Band, Dirty Dozen Brass Band, Youngblood Brass Band to name a few (as well as that bit at the beginning of Live And Let Die), Horn Dogs have rapidly earned a reputation for lively, energetic shows .


September 5th - Virtuoso Jazz Trio
Whenever this trio assembles on the concert platform the sense of fun and excitement is palpable. Their repertoire is rooted in the very best of the Great American Songbook. to which audiences of all ages and musical tasted respond with a sense of delight. George Macdonald (Clarinet) James Birkett (Guitar) Tony Abel (Bass)