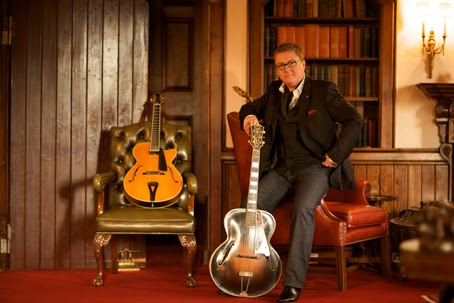 Multi-award winning guitarist and composer Martin Taylor has established a unique musical career as an internationally acclaimed musician, and his inimitable style has seen him recognized as the world’s foremost exponent of solo jazz guitar playing.

Although completely self taught, he has enjoyed a remarkable musical career spanning across five decades, and during that time has invented and developed a way of playing the guitar that is admired, and often imitated, by guitarists all over the world. As well as being a true guitar innovator, he is also a master concert performer, dazzling audiences with his solo shows, which combine virtuosity, emotion, humour, with a strong stage presence.

As well as his solo concerts and recordings, he has also collaborated with musicians from many different musical genre including, Stephane Grappelli, Jeff Beck, Chet Atkins, Bill Wyman, George Harrison, Dionne Warwick, Diane Schuur and Jamie Cullum. His ground breaking solo album Artistry, produced by Steve Howe, was released in 1992 to much critical acclaim. It was No 1 in the HMV Jazz Charts for a record 12 weeks and launched his career as an international solo artist.

The ensuing years have seen him release further albums for Sony/Columbia, Kiss and Tell and Nitelife, and receive countless awards, two honorary doctorates and, in 2002, an MBE for services to Jazz Music. His on-line guitar academy, launched in 2010, is now subscribed to by guitarists in over 58 countries.


“Martin Taylor is one of the most awesome solo guitar players in the history of the instrument.” - Pat Metheny

“He out-shred’s all of us put together….I’ve never seen anything like it” - Jeff Beck