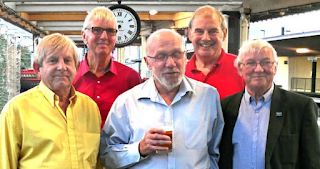 Our slight departure from our usual offerings last month delivered by Mr Langham’s skilful Hot Fingers and the just amazing classical vocalist Emily Campbell with their extremely well presented, relatively new ‘And The Banned Played On Show’ attracted a gradely crowd.. It will come as of no surprise to you to hear that the night’s miscellany of numbers was of course rooted out by the forensic inquisitiveness of the Bands Leader Mr Tom Langham. I think that all those present experienced a night that they will not forget for quite some time!

Tonight’s High Society Jazz Band from the Cumbria area should be making their third appearance at the Dove Jazz Club but in actual fact it will only be their second owing to the severity of the Winter weather in March 2018 understandably preventing their appearance. The Band is now enjoying its thirteenth year on the ‘Traditional Jazz Circuit’ with their hugely varied repertoire honed to entertain their audiences as well as giving them an insight into the many different aspects of the jazz genre. They have an innovative and vastly experienced two man front line comprising their titular head Bruce Carnaffin playing clarinet, bass clarinet. He is joined by Peter Boswell who ably performs on both cornet and trombone; could there be a Brass Band influence somewhere here I ask myself? A strong and seasoned rhythm section will contain Dave Bateman with his guitar and banjo, Gerry Clayton playing his well-travelled string bass and last but not least Robin Andrews on board his percussion kit which also contains a washboard and harmonica. Bruce Carnaffin also does much to promote the ‘Jazz Cause’ as the Chairman of Kendal Jazz Club; a position that he has proudly held since 2009.