The Wabash Jazzmen at Dove 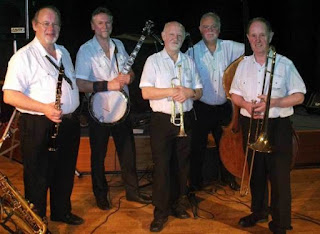 Sat 20 July marks the return to the Dove Jazz boards of the hot yet drumless band known as the Wabash Jazzmen. It has its roots loosely based on what many would still call and recognise as being the ‘Potteries’ although its present line up does include a couple of overseas players from the twitch free cricketing squares of South  Manchester.

As you will be able to hear first-hand tonight the absence of a drum kit is more than compensated for by the driving banjo playing of their leader  Mark Challinor. Mark’s considerable musical prowess is most ably promoted by the entertaining and powerful bass playing of Richard Vernon. Richard is a vastly experienced string bass player whom it is always a special pleasure to welcome back to the Dove podium. Who can forget his numerous appearances playing alongside the greatly missed but never forgotten Tommy Burton and his  Sporting House Quartet that featured drummer Dave Holmes a youngish Tom Langham on banjo playing with Mr Vernon. I don’t think that it is a state secret that Mr Langham always lovingly and respectfully referred to him as ‘Mr Pastry’ and still does.

Featuring on the front line on trumpet and harmonica plus the odd vocal will be Bill Smith a man whose enthusiasm for our music never gives any hint of waning. His energetic approach to his profession is a glowing example to many much younger musicians who could do much worse than take a leaf out of his book. Much the same sentiments could be expressed about tonight’s trombone maestro Mike Pembroke who joins Bill in being described as an overseas player residing amongst the cricketing strong holds of Bredbury, Woodley, Romiley and Compstall. We have Mike Hayler on clarinet and tenor sax completing the front line. He is eternally grateful to the ‘Centre of the Universe’ for affording him the opportunity to be a founder member of the indefatigable ‘Bibbington Limeburners’ Brass Band.  His dedication to the cause of ‘Temperance’ that the Limeburners famously promoted earned him many fanciful plaudits