Leeds is such an amazing city for live jazz now it is almost impossible to pick out three highlights but here (with one big add-on!) they are,,, 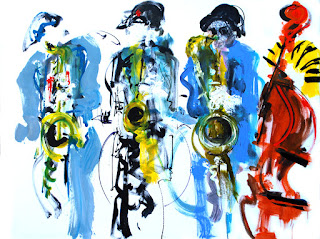 The Shuffledemons (painted by Gina Southgate)

The Leeds Jazz Festival 2018 was a much bigger event this year, covering six days in July with six venues and around 50 bands. The grand finale, curated by Sally Coe, Xero's partner was "Celebrating  Xero Slingsby" on 24 July at the Wardrobe. Xero was a punk jazz sax hero in Leeds in the 1980's, his music is now popular amongst young jazz musicians, especially Belgium where Xero played a lot so we were pleased to welcome Den Hoed over to take part. The event was a triumph from start to finish. Improv, the changes, dancing in the ailes, Gina Southgate's live painting, The Shuffledemons from Canada, Leeds Local Heroes like Tony Burkill , Maggie Somers, Paul Hessian, Louis Colan etc. 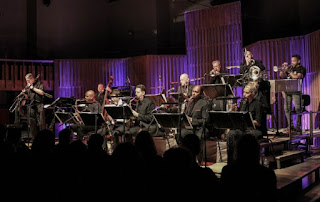 The Mingus Big Band at the Howard Assembly Room 13/10/18.  Simon Godley's review sums it up "A nigh-on two hour performance – bisected by a short interval – the Mingus Big Band provided the sell-out crowd with a startling reminder of Charles Mingus’s genius as they shifted easily from the swaggering invention of ‘Jump Monk’ (a song that first appeared on the 1955 live concert recording Mingus at the Bohemia) to a modern arrangement of ‘Invisible Lady’, cementing Mingus’s place in the vanguard of the Third Stream. Charles Mingus’s generosity as a bandleader was well-regarded and this was replicated in today’s ensemble with ample time and space afforded each individual musician for what were some really quite incredible, improvised solos. Philip Harper was the first to step up to the plate during ‘Jump Monk’ with a raucous, rebellious blast of his trumpet whilst Helen Sung contributed a most phenomenal piano interlude during ‘Sue’s Changes’, a wonderfully spontaneous ballad-come-free jazz piece written by Mingus for his wife." The Howard Assembly Room programme has had some lovely jazz during the year, curated by the irrepressible Jo Nockels - the venue will be missing from the Leeds Scene from March 2019 for 12 months because of rebuilding and improvement works but it will mean even more jazz can be programmed there afterwards.

My third honour goes to the whole Leeds Jazz Scene. When I first came to the city in the 1980s there were maybe four venue playing jazz? Now there are almost 30. Special mention must go to local heroes like Richard Lindley at the Cafe Lento, Jack Simpson at the Hyde Park Book Club, Les and the team at Jazz at the Spa, Mark Young at the Sela Bar, Ryan de Warne at the Domino, both Leslies (Best and Jeffries) at Heart in Headingley, and the two JazzLeeds venues run by Leeds Jazz - Inkwell and Seven Arts in Chapel Allerton. Also worth mentioning are the jazz musicians appearing increasingly at nightclubs like the Brudenell, the Belgrave, the Wardrobe etc where they are putting on musicians like Pharorah Sanders and David Murray. The Leeds young jazz album "To be there now" was a triumph - produced by local saxman Ben Powling and highlighted by Jazz DJ Gilles Peterson.