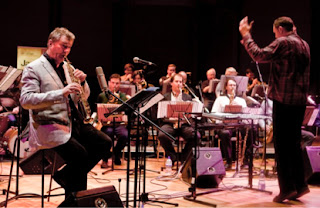 Another great Sheffield Jazz season beckons - with a tremendous line-up and all at the same ticket prices as last year. First gig to open the new season is at the Crucible Studio on Friday 12 October where we're delighted to welcome the Jean Toussaint All-Star Sextet.   Jean will be presenting his latest album "Brother Raymond", as part of a UK tour with his all-star sextet.

For the rest of the autumn season, all the gigs are at Crookes Social Club.

October brings two top-line bands who always produce great performances here in Sheffield. On 19th October - the Clark Tracey quintet brings his latest line-up of gifted young musicians.  Clark will also be talking in an Off the Shelf event that afternoon about his late father Stan Tracey, the internationally-acclaimed jazz pianist.  The following week on the 26th October sees the return of the LA-based Benn Clatworthy quartet, with Benn's truly great tenor sax sound supported by John Donaldson on piano and a top-class rhythm section.

The brilliant Tony Kofi has a new quartet and he brings it to Sheffield on Friday 9th November to mark the release of their debut album "Point Blank". Tony’s followed on the 16th November by Hexagonal, a sextet featuring Jason Yarde and Greg Heath on saxes and John Donaldson on piano.

On the 23rd November we have a rare chance to see one of the most exciting and original big bands working in Europe, Stan Sulzmann's 20-piece Neon Orchestra on their "70th Birthday Tour". And, we're delighted to bring you one of the UK's leading rising stars Freddie Gavita and his high-powered quartet on the 30th November.

Finally, to round off the season we have two bands in December. First up on Sunday 9th December is the Sheffield University Big Band, ably demonstrating that the classic big band sound is still going strong. And the season ends on Friday 14th December when we welcome the Coltrane-inspired trio Satori led by sax player Josephine Davies.