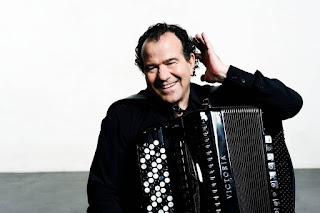 The legendary French accordionist Richard Galliano returns to the Howard Assembly Room on Saturday 24 March to bring the spirit of Paris’s wartime nightclubs into the heart of Leeds. One of the great accordionists of the modern era, Galliano is joined by the peerless jazz guitarist Sylvain Luc for a performance dedicated to the grande dame of French chanson: Édith Piaf.

The Guardian writes: ‘In his 30-year career, French accordion virtuoso Richard Galliano has done what Astor Piazzolla did for the tango – rescued a traditional music – in this case the French musette – from the grip of nostalgic cliche… placing it at the heart of modern, jazz-influenced European music.’

On his 2015 album La Vie en Rose, Galliano turned his attention to chanson, collaborating on a stunning set of the songs of Édith Piaf with Luc, whose own credentials include two duo recordings with Gypsy Jazz great Biréli Lagrène. Both extravagantly gifted improvisors, Galliano and Luc’s live performances of the Piaf repertoire are a must-see.

Tickets for all events at the Howard Assembly Room are available from the Box Office on 0844 848 2727 or online at howardassemblyroom.co.uk