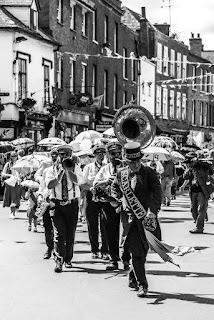 The 2017 Keswick Jazz and Blues Festival can be described as a “wonderful rescue mission” under custodianship of a “marvellously dedicated new team” by organiser Ian Jones. Many know Ian as one of several regular sound engineers who worked with Keswick Jazz Festival for years. Music has been Ian’s lifelong career – professional musician, club owner and teacher, now sought-after sound engineer – familiar to many a festival and to many a recognisable musician.

Ian and others were sorrowed to watch the Keswick Jazz Festival stagnate somewhat – to the point at which the Theatre by the Lake withdrew its custodianship altogether. Rather than stand by watching it disappear, as so many other Festivals have in recent years, it was realised some serious re-growth in the hands of someone capable might yet save it from this fate.

To re-invigorate the festival on behalf of all the businesses who valued it (if only for the revenue it attracted) was no minor task and no small ask either. Says Ian

“The folk who persuaded and helped are the ones who deserve the applause” Ian argues, as he has shied away from being called Manager, Director or indeed any other title. He insists on ‘only the organiser’ and remains quite humbled by the confidence placed in him and the support so many freely give. He says, as example, the “army of Stewards who came forward was overwhelmingly heartening, and the work Gill Scholey did (Steward Manager / Liaison Officer) genuinely fantastic too. It wouldn’t have happened without any of them”.

Innovative long-term plans are already afoot - the classic Blues element will be further developed over the years to come, as it is even now proving its appeal to the broader market, and Jazz in the Keswick Jazz and Blues Festival will absolutely retain everything tradition demands.

For tickets visit http://keswickjazzandbluesfestival.co.uk/ or call 03306062654