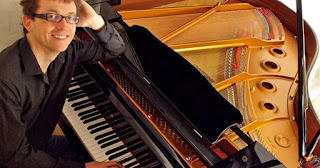 Got a hangover? Common on, shape up! Okay, it’s January 1st but there’s a jazz gig to go to in the North East. The Bernicia Jazz Trio play the Half Moon Inn in Choppington, Northumberland at three o’clock and it’s free admission. Getting out to a jazz gig is the best known ‘hair of the dog’ cure there is. Just think, there’s a further three hundred and sixty four days and nights to get out and about to listen to some jazz. Start as you mean to go on!

So, January begins in small scale fashion with a trio in a semi-rural pub but the month closes with a rather more grand affair with a staging of Will Todd’s Mass in Blue in Durham Cathedral (Jan 27th). The Will Todd Jazz Quartet will be performing alongside Durham Choral Society in a concert which is part of the Durham Vocal Festival. In between times there is plenty of top class jazz including an all day celebration of the Luxembourg jazz scene (Jan 21), a Chris Sharkey workshop performance (Jan 24) and two final tour dates for an emerging guitar-led quartet. Jazz North East’s promotion at Newcastle’s Lit and Phil – Jazz de Luxe – presents a day-long, two-part programme of concert sets by musicians from Luxembourg’s contemporary jazz scene and Tyneside trio Archipelago. Guitarist Chris Sharkey will be at Newcastle’s Jazz Café in the first of two open workshops during which the Gateshead-born improviser will preview, and further develop, work which will be premiered at this year’s Gateshead International Jazz Festival (April 6-8th). On this occasion Sharkey will be working with Leeds based pianist Matthew Bourne. It is anticipated that Sharkey will forsake playing his Stratocaster in favour of developing an experimental, electronic soundscape. Francis Tulip will most certainly be playing his Gibson guitar at Hexham’s Fox Inn (Jan 9) and Darlington’s Quakerhouse (Jan 14), the remaining two dates of a festive tour of north east venues. Tulip, studying at Birmingham Conservatoire, will be working alongside pianist Joel Brown, Guildhall undergraduate bassist Michael Dunlop and Matt MacKellar, a hugely talented drummer currently studying at Berklee.

Pianist Paul Edis crops up on at least three occasions during the month – first, with his own trio at Saltburn Jazz Club (Jan 5), a week later (Jan 12) as part of Triptych at the Jazz Café, and exactly seven days on he will be returning to the Pink Lane venue with the Graeme Wilson Quartet. Sage Gateshead offers little jazz in the early part of the year but one concert which will be well attended is Ray McVay’s return with his UK Glenn Miller Orchestra. A nostalgia trip perhaps, but be assured that within its sections the band boasts many ‘been-there-done-that’ jazz musicians. The Sunday matinee performance (Jan 14) is selling fast. To check ticket availability telephone 0191 443 4666.

Finally, violinist Emma Fisk is out and about, first with her Hot Club du Nord (Jan 12) at St Mary’s Parish Hall in Barnard Castle, then on Jan 19 she plays a lunchtime duo gig with guitarist James Birkett at Bishop Auckland Town Hall playing the music of Joe Venuti and Eddie Lang.