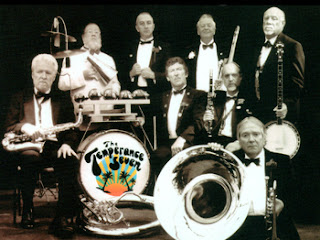 Summer has arrived, bringing with it a flurry of out door events across the north east of England. The first DJ Durham City Jazz Festival, staged over three days (June 2-4), will pop up at several venues including an outdoor stage in Fowler’s Yard. Durham’s enterprising quirky Empty Shop is working with Durham University Jazz Society to bring jazz to new venues across the city. Barber shop, laundrette, and that empty shop, are just some of the ostensibly unusual places keen to be part of this commendable venture. Contemporary bands Archipelago and Taupe take their place alongside the guitar duo of Mark Williams and Joel Byrne-McCullough and Durham University Big Band and many others. For full details visit www.emptyshop.org

Northumberland weighs in with major outdoor marquee events during the month. The Tyne Valley Big Band can be heard at the Haydon Bridge Festival (June 24) and at the Tynedale Beer Festival (June 17) in the grounds of Tynedale Rugby Club. The Vieux Carré Jazzmen open the three days of drinking, eating and general merriment on Thursday 15. The festival is hugely popular, so, to be sure of getting in book in advance at www.tynedalebeerfestival.org.uk. Let the train take the strain, the picturesque Tyne Valley line is the way to travel with stations in close proximity to the venues.
Over on the east coast you can catch the always entertaining Northern Monkey Brass Band at the annual Alnmouth Festival (June 17).

You like to hear good New Orleans clarinet? Sammy Rimington is on tour with Emily Bacon’s Good Time Gang and they’re calling in at Saltburn Jazz Club (June 2), and Darlington New Orleans Jazz Club (St Augustine’s, lunchtime June 3). Of similar vintage, the Temperance Seven are on tour for the umpteenth time –it’s the band’s golden jubilee and they’re promoting their new CD – and there is a concert at Middlesbrough Theatre on June 15. The New Century Ragtime Orchestra play tunes of the new century…that’s the twentieth century. The clue is in the name ‘Ragtime’. The pad spans c1895 to the dangerously modern Ellington c1935. Seriously, the NCRO is a valuable resource, the kind of band that is devoted to documenting the roots of the music. Some members of the band are into contemporary developments but are keenly aware of the importance of the work of the NCRO. Gateshead’s Caedmon Hall is the place to hear them on June 9. Two invited guests will perform on the night – piano virtuoso Martin Litton and period percussion specialist Nick Ward. Recommended

Turn of the century jazz (that’s the twenty first century) can be heard across the region during June with a Jazz North East double bill (June 4) featuring Kepler Orbit and the duo Henrik Jensen-Peter Ehwald at the Bridge Hotel. Similarly, Cumbria based tenor saxophonist Jake Steels plays a quintet gig at Darlington Jazz Club in the Quakerhouse (June 25). Samuel Eagles’ Spirit Sextet turn up the Newcastle Jazz Co-op’s Globe public house (June 13) and, perhaps the gig of the month, sees Joe Morris working as a duo with Tony Bevan. This Jazz North East promotion is at the Bridge Hotel on June 11. If you’re yet to hear Morris, this appearance by the American free jazz guitarist is a must.

Newcastle’s Jazz Café should be packed two nights running. June 21 sees the Durham University Big Band shoe-horned into the upstairs room (big band, small room, wow!) and the following night, Group Theory could be something special. Comprising members past and present of DUBB (that’s Durham University Big Band), pianist Matt Jacobs has added a NYJO gig to the CV and altoist Dan Garel has been out in Canada and he can add to the resumé ‘studied with Ingrid Jensen’. Finally, at Gateshead’s Prohibition Bar (June 1) there is the double bill of In Other Words and BLT. They’re young musicians (age range 14-17), they can play and they boast a burgeoning pad. Jazz Lives!