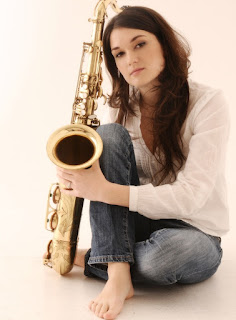 The UK can boast many jazz saxophone stars- and many of them will be playing at this year's Scarborough Jazz Festival.  Alan Barnes (also festival compere) and Dave O’Higgins, both stunning musicians, will lead five front-line saxes and a rhythm section.  London born Benn Clatworthy, now based in Los Angeles, brings his quartet and James Griffiths has said: “Like Sonny Rollins he is harmonically adventurous, and is capable of playing at speeds that recall Charlie Parker.”

Trish Clowes, whose picture features on the festival posters and programmes, will play with Gareth Williams, one of the country’s leading modern jazz pianists.  Jamie Cullum said of her: “This is British jazz at its best […] I suggest you go and see her now before it’s difficult to get in the room.  I assure you she is great talent.”

Nathaniel Facey, a BBC Jazz Awards rising star nominee, will play the music of Charlie Parker in a six-piece band project linking big screen shots from the forties and some fabulous singing from Vimala Rowe.

Finally Australian saxophonist Brandon Allen, who brings a six-piece to the festival, is based in the UK and hosts a late night session at Ronnie Scott’s. He has played with many great stars including Eric Clapton, Paloma Faith, Kyle Eastwood and Stan Tracey.

The festival takes place on 23-25 September at Scarborough Spa. Tickets are priced at £90 for the weekend, with day and sessions tickets also available.
ickets are available from www.scarboroughjazzfestival.co.uk or the Scarborough Spa Box Office (01723 821888).