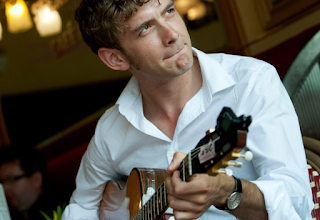 This July sees the second HJGS Jazz Guitar Festival. A three day celebration of jazz guitar, the festival was a mixture of free concerts, ticketed events and workshops, all held at the Rat and Ratchet in Huddersfield.

This year the festival has some themes covering a wide range of jazz guitar styles. Friday is very much a Gypsy jazz night with two of the U.Ks  leading exponents. Saturday is a celebration of the great Charlie Christian while Sunday sees a leaning towards the Organ trios. In addition to all this there are free concerts throughout the day, workshops, jam sessions, raffles and competitions.

8:30 Remi Harris, Caley Groves and Paul Baxter (bass)
9:30 Gary Potter and Paul Baxter (bass)
Gypsy Jazz is fiery acoustic guitar music which has remained popular since the days of Django Reinhardt and the Quintette du Hot Club de France in the 1930’s. Britain’s two leading exponents are Gary Potter and Remi Harris and its a real treat to have them on the same bill.
Cost: £14 (£11 HJGS members)

Sunday 24 July
Soho Nights is the tribute to the great jazz and organ groups of the 60s.

9:30 Terry Smith, Paul Baxter (bass) and Paul Smith (drums)  
Terry Smith is one of the UK’s best guitarists. Twice winner of the Melody Maker Music Polls, Terry Smith spent the early 1960s playing with the Tony Lee Trio, before becoming Scott Walker’s musical director and accompanying The Walker Brothers on their Japan tour in 1968. Returning to the UK, he recorded a solo album, Fall Out (1968), and appeared with Morrissey on Brother Jack McDuff’s Blue Note recording To Seek a New Home (1970).