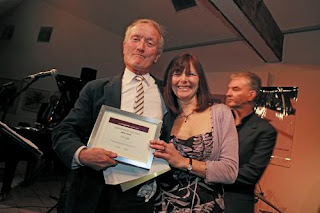 Gill Wilde is stepping down from running the Cleethorpes Jazz Festival after eight years at the helm. She announced this at the end of another successful Cleethorpes Jazz festival that finished on Sunday. Under her guidance the festival has developed a deserved reputation for promoting high quality accessible jazz from top British jazz players. "My biggest thrill has is where people have come up to me at the end and said they'd liked everything!" Says Gill

Gill has also encouraged local bands and special commissions. This year for example the North East Lincolnshire Jazz orchestra and the young musicians of Sound Departure both played sets, and the finale of the festival was the premiere of "The Grimsby Fish Tail - A Port in a Storm" written by Alan Barnes and Pat McCarthy with readings from local poet Josie Gray.

Gill will be handing the festival over to Charlotte Bowen, Director of Arts organisation "The Culture House" in Grimsby so it sounds like it will be in good hands. Gill will continue to run the Grimsby Jazz Club which runs monthly gigs throughout the year