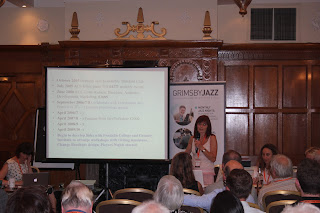 Gill Wilde from Grimsby Jazz at the JPN conference 2014

The national Jazz Promotion Network have their AGM and planning conference being held alongside the opening of the Rhythm Changes conference in Birmingham University next Thursday 14 April. If you are a member of JPN, attendance is free; if you aren't a member you can still attend costs £30. Details are here http://jazzpromotionnetwork.org.uk/agm-2016/

The JPN have been valiantly trying to make a national network of jazz promoters - a bit like what Norvoljazz do in the North to connect promoters so that they can more easily collaborate on events and programming and potentially make their own applications to the Arts Council.

Steve Crocker from Seven Jazz Leeds and secretary of Norvoljazz has been on the JPN board for the first couple of years to help set it up but is standing down to concentrate on other things - including the new Village Jazz Festival in Leeds to take place the first weekend in September in Chapel Allerton. Says Steve..

"Jazz Networks are hard work, but vital. You need to be patient, you need to build trust and relationships, and most importantly focus on the grass roots of jazz. That all takes time and it’s not very flashy or rewarding. I’ve been a board member of JPN for the first couple of years just because it it trying to do those things. I won’t be continuing in April but that’s due to personal time pressure not because I don’t believe in it. It is well worth supporting"

Norvoljazz could however still be represented on the board however through the Marsden Jazz Festival producer Barney Stevenson who has put his name forward. He'll be a great resource to the JPN. Let's hope he gets elected.