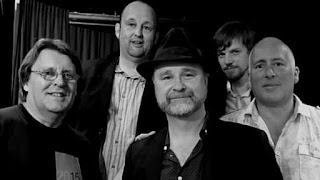 Since their appearance last September there has been an overwhelming demand for a return booking. Not wishing to disappoint Scarborough Jazz have once again teamed up Rich Adams, Dave Kemp and Mark Gordon with club regulars Tom Townsend (drums) and Bob Walker (bass).

Rich Adams has long been a first call vocalist on the local music scene and is known not only for his emotive singing but also for his ready wit and warm personality - attributes which also make him a great compere. He is well known for his long term partnership with Mark Gordon in Stony, also as the vocalist for The Northern Showtime Orchestra, his association with Dave Greaves in The Adams and Greaves Band and as a solo singer/songwriter.

Dave Kemp was last seen at the club with his own sensational band The Unkempt. A sax player of exceptional talent who, as a member of The Little Angels, shared stages with Bon Jovi and Eddie Van Halen.

Mark Gordon, as well as working with Rich for many years in Stony, is also the resident keyboard player at The Den (at The Cask on Thursdays) with The Tom Townsend Blues Band. He is also well known on the local function circuit both with bands and as a solo pianist. More recently he as worked as Musical Director at The SJT on a number of their productions. He is also director of the Funky Choir.

A night of wonderful music in wonderful company awaits - expect renditions from The Great American Songbook amongst many other musical treats.

For more details, go to our website: www.scarboroughjazz.co.uk. Doors at The Cask open 8.00pm.