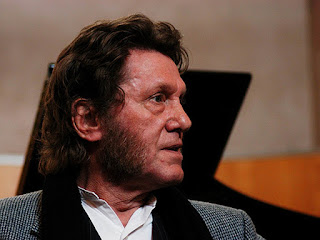 From Martin Archer, director of Sheffield based Discus

Composer/pianist Keith Tippett needs little introduction to those with an ear to the ground in the world of creative music.  Appearing initially on the London jazz scene in the 1960's, Keith quickly forged a reputation as a formidable player, bandleader and composer.  His large scale work Septober Energy for the 50 piece ensemble Centipede remains a benchmark recording in the history of this music.  Subsequently leading ensembles as diverse as Mujician, Ovary Lodge, his duo work with Julie Tippetts plus appearances as an improvising piano soloist have consolidated his position as a major figure in both improvised and composed music.  In 2016 he remains as active as ever on the international stage.

The Nine Dances Of Patrick O'Gonogon was commissioned by Richard Wiltshire and was recorded by the Keith Tippett Octet at Real World Studio in the UK.

This new suite is based on themes from Irish folk music and was written for his new octet, which includes several recent graduates from the Royal Academy of Music’s jazz programme along with a long-time collaborator, the drummer Peter Fairclough, and the London-based Italian trumpeter Fulvio Sigurta.

Discus is running a Kickstarter campaign to make this release possible and to sell as many copies as possible in advance of the release date (Summer 2016).  Do feel free to help! Here is the link
https://www.kickstarter.com/projects/1707230936/keith-tippett-octet-the-nine-dances-of-patrick-ogo