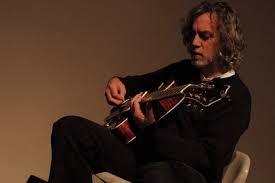 "With so much variety, how on earth to select just three memorable gigs? The answer is, I can’t, but here’s a selection that perhaps illustrates that variety (although almost any other three would have done just as well).

An astonishing performance in so many ways, starting with the fact that the band was in Newcastle at all, having flown in for just 24 hours to play the only UK date of their European tour. Joe Morris is an astounding guitarist, possessed of the kind of fleet fingered technique that in too many other cases manifests itself in flashy pyrotechnics, but which in Joe’s case is at the service of an equally agile imagination. His partnership with violist Mat Maneri goes back decades, and it shows; they seem almost like two sides of the same brain, firing ideas across the synapses to charge up music that feels pre-ordained in its perfection, and then moves on. With Chris Lightcap on bass and Gerald Cleaver on drums - both of them also old sparring partners for Joe and Mat - this was free improvisation of the highest empathetic order.

Jazz North East recorded the gig, and Joe was so pleased with how the whole thing went that he’s talking about issuing this as the quartet’s first ever live recording. So that’s all next year’s Xmas presents sorted out.

A triumph of a different nature. An iconic figure in the New York free jazz revolution of the 1960s, vocalist Linda Sharrock suffered a major stroke in 2009, leaving her largely paralysed and without the power of speech. But her ability to listen closely hadn’t left her and, with the support of sympathetic friends in her adopted home of Vienna, she has rebuilt the ability to find a place in the music and to create near cathartic improvisations of whoops and yells and repeated phrases. She came to Newcastle with one of her closest supporters, saxophonist Maria Richter, and the Sheffield-based improv trio of Derek Saw, John Jasnoch and Charlie Collins, and gave a performance of almost overwhelming intensity. This was music as an enduring state of mind, deploying remembered skills to brilliant effect.

OZMA at the Bridge Hotel, Newcastle

Jazz North East’s love affair with French jazz continues, and the quintet OXYD could very well have made their way into this selection, But OZMA just get the nod because their gig was a remarkable game of two halves. For the first set they played an accompaniment to the Buster Keaton movie ‘Three Ages’. This format of live music to silent film isn’t unusual, but almost invariably the musicians seem to feel obliged to play in ‘period style’ . . . which in this case would have meant a kind of pastiche 1920s jazz. But no, OZMA’s music was up to the minute contemporary, yet was brilliantly matched to Keaton’s deadpan screen imagery. Then, for the second set, the quartet let rip with jazz that has been described as having “enough raw energy to power a small city” - it certainly lit up Newcastle!