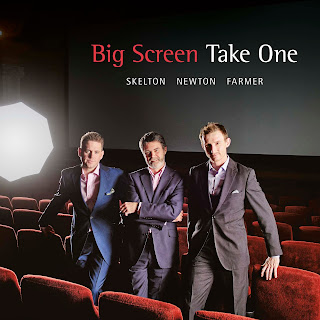 "Just spent last weekend at the inaugural Llandudno Jazz Festival which came about due to the demise of the Titley festival (5 years running) which was in turn the reincarnation of the much missed Appleby festival which ran for 14 years prior. Artistic Director was trumpeter Neil Yates with the support of a professional promoter and the Welsh town’s tourism machine who put on a great show . The ‘Appleby-Titley’ crowd turned up in large numbers to hear a celebration of Britjazz in a marquee overlooking Llandudno bay/beach. Despite a rainy Sunday the event was highly enjoyable a big success.

I mention this because the gig that produced the loudest and longest standing ovation was on Sunday morning – The Matt Skelton-David Newton-Tom Farmer ‘Big Screen Take One’ Trio playing a spectacular 1 hour 15 minute set of movie theme music.

Anyone who wants a lot more of that can hear 2 hours of the trio at our gig at The Royal Clifton Hotel Southport on the evening of Sunday August 23rd. It really was a barnstormer of a set and I for one can’t wait to hear more.