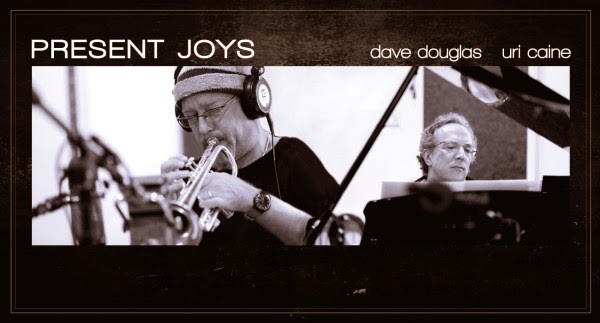 There were several alternatives for the jazz audience in Leeds this Friday – Snarky Puppy were at the Wardrobe,  Melt Yourself Down at the Brudenell - but for those who like their jazz to be more reflective there was just one place to be, to see trumpeter Dave Douglas and pianist Uri Caine at the Assembly Rooms. The concert was the only UK date on a wide ranging European tour. Perhaps too wide ranging - “We’ve just played dates in Turin, Basle Hamburg, Seville, Katowice in Poland and now Leeds” said Dave Douglas.  “Not the most obvious tour schedule!”

The evening in Leeds was a captivating conversation between trumpet and piano full of memorable melodies and a wide palette of musical colours. The concert showcased their music from “Present Joys”, newly released on the Greenleaf label. There was a spiritual feel to some of the pieces, inspired by “The Sacred Harp” tradition - a cappella choral music that flourished in the south of the United States in the 18th and early 19th centuries, originating from Protestant Christian music.

Other pieces including several new Douglas compositions, embraced classical music, jazz and blues.  “Hamfist” was fast and furious, “End to End” (a tune composed of endings to pieces) was witty and fun, “Old Put” inspired by the distant sound of a train featured Dave Douglas whistling through the trumpet. Uri Caine’s piano playing was awe inspiring- a brilliant accompanist, an inventive soloist, always listening, always finding new directions to explore.

Their delight in playing for the audience and for each other was clear. As the daylight faded into night through the Assembly Room windows and the atmosphere became even more enchanting, the duo were given a rousing acclamation at the finish and the inevitable encore.

Leeds has been a good city in which to hear jazz duos in recent months. The Assembly Room, and especially Jo Nockells, the programme organiser are to be commended for their excellent programme. The concert was recorded by the BBC for Jazz on 3, so listen out – it will be well worth it.